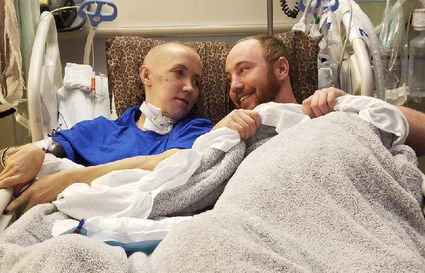 Kayla Vigil and her fiancé, David Clinton, cuddle in a hospital bed in Salt Lake City.

She may have lost her eye, but the accident didn't claim her life and that's something she's grateful for.

Green River resident Kayla Vigil's life completely changed on July 27. Vigil, 23, and her fiancé, David Clinton, 25, decided to go for a 4-wheeler ride near the shooting range at FMC Park.

Clinton said it was a Friday and they had decided to go for a quick ride before meeting up with some friends later. At first, Clinton was driving the 4-wheeler and Vigil was in back, but then Vigil wanted a turn to drive.

While Vigil was driving along, Clinton saw a steep hill and thought it would b...