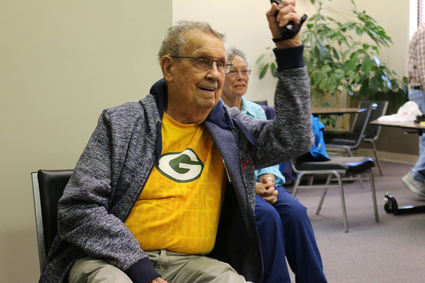 Wes Heikkinen swings his arm with the Wiimote control in his hand to see if his bowling ball. He then waits to see how many pins are knocked down by the ball.

The laughter could be heard in the hallway.

While at the Golden Hour Senior Center Thursday morning, eight seniors were playing Wii Bowling in one of the recreation rooms. It's was their laughing passersby could hear.

One group of four, Gail Robertson, Melinda Roundy and Gail and Wes Heikkinen, were taking turns using the Wiimote to roll the bowling ball down the screen on the TV screen.

Robertson was having a spare game. It seemed like almost every time she would roll the ball it would look like it was going to be a strike and then one pin was left standing.