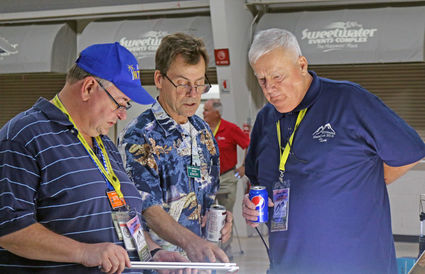 Brian McNutt of Cheyenne, from left, Roger Dean with Wired Communications and Tim Wilson of Cheyenne look at the light, while Dean tells them about it. This was just one of several vendor booths at the ARRL Wyoming Convention.

For quite possibly the first time, Southwest Wyoming hosted the ham radio conference on this side of the state.

Rick Breininger, president of the Sweetwater Amateur Radio Club, said as far as he knows this past weekend was the first time Southwest Wyoming has hosted the 2018 American Radio Relay League Wyoming Section Convention. The convention took place at the Sweetwater Events Complex this Saturday with about 60 in attendance from Wyoming, Colorado, Utah and Idaho.

"It moves around the state every year," Breininger said. "I think it says our location is interesting and growing."