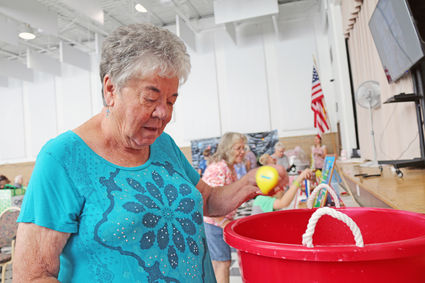 Nell Schrepfer checks to see if the number on the duck she just took out of the bucket matches one she already picked. She disappointedly put the duck back.

Some of the games seniors played included, ring toss, football toss, spin the wheel, disk drop, go fishing and pick a duck. When they weren't busy playing these games, seniors were having their arms or faces painted or trying their luck at Wii skee ball.

Others were enjoying the great treats traditionally found at a carnival, including cotton candy, popcorn and funnel cakes.

Once the residents got the feel of the games, they focused on trying to win as many tickets as they could win. Each ticket earned,...