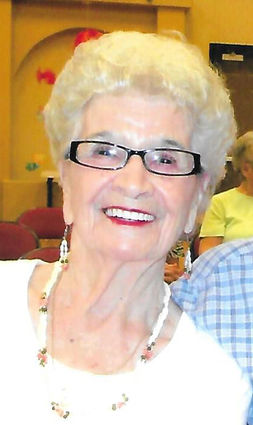 Margaret Elizabeth Warby was born in Jackson Hole on Oct. 18, 1924, to John and Francis Stacey. She died of natural causes at her home in Yuma, Ariz., on Aug. 3, 2018, after spending the day visiting with her children, grandchildren, great-grandchildren, and great-great grandchildren.

She grew up in Rock Springs where she graduated from high school in 1942. She married Jerry D. Warby, the love of her life, on Nov. 4, 1948. Soon afterwards they moved to Green River, where they raised their family. They were married for almost 70 years until Jerry's death July 23, 2018.

She loved people and loved working. She was a telephone operator with Mountain Bell for more than 20 years, until the company went to dial phones. She also worked as a clerk for several local businesses and worked as a clerk in the Sweetwater County Clerk's office until she retired in the mid 1980s. Upon retiring, the two started their lives in Yuma, Ariz., as snowbirds and moved there permanently six years ago.

Margaret loved to dance, loved to go anywhere and do anything, and loved to visit. She was always dressed to the nines, ready to go and do at a minutes notice. She and daddy took several trips and cruises together. She was known for her quick wit and ready smile. She was truly a happy, optimistic, fun person. Margaret was a seamstress when her girls were young. She made most of our clothes and her husband's favorite woolen shirts for years. She was also a consummate housekeeper. The couple were members of St. John's Episcopal church in Green River where she served on the altar guild, as a lay reader and worked in the thrift shop with Jerry for years. During the winter and upon her relocation, she was a regular communicant at St. Paul's Episcopal Church in Yuma, Ariz.

She was preceded in death by her husband, her parents, and two brothers, John Stacey and Bruce Stacey.

The family requests that in lieu of flowers you remember this vivacious, joyful soul with a contribution to St. Paul's parking lot fund or to St. John's Episcopal Church in Green River.