Fires break out in Green River and Rock Springs 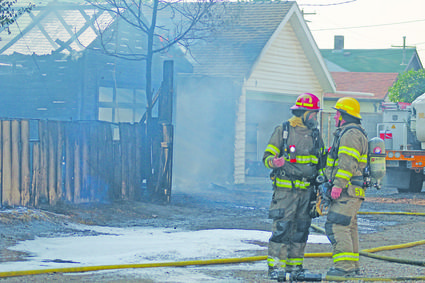 Two Rock Springs firefighters talk about the department's plan of attack as they take on a residential fire on Bridger Drive, next to the historic Slovenski Dom.

Fires in both Green River and Rock Springs kept area firefighters busy during the past few days.

"We're not sure if it was the fuel line," Nomis said, saying the cause of the fire is unknown.

The fire involved a recently-purchased used ATV that had caught fire. The fire department extinguished the blaze. The only damage reported was to ATV itself.

Rock Springs wasn't immune to residential fires either. The city's fire department responded to two fires throughout the weekend. The first, a porch fire, occurred at 400 Blair Ave. According to a release from the Rock Springs Fire Department, the Sweetwater County Fire Department responded and assisted a bystander with extinguishing the fire. No damage was reported and the home's occupants were uninjured.

The second fire occurred just before 6 p.m. Sunday on Bridger Drive. The fire department responded to garage fires at both 507 and 503 Bridger, as well a fire that had extended from the garages to the roof of the home at 507 Bridger and a neighboring garage on Soulsby Avenue. Firefighters and police officers evacuated neighboring residences as other firefighters started battling the fires and cooling nearby exposures.

According to Rock Springs Fire Chief Jim Wamsley, the fire spread to the roof of the home through radiant heat coming from the garage fires. The heat caused the wood within the home's roofing system to heat up and release flammable gas, which started burning. However, what caused the main garage fires is still unclear.

"I'm not sure we can attribute the main fire to radiant heat, but the home and adjacent garage on Soulsby were caused (by radiant heat,)" Wamsley said.

According to the press release, the RSFD was assisted by Sweetwater County Fire District No. 1. The fire is still under investigation.