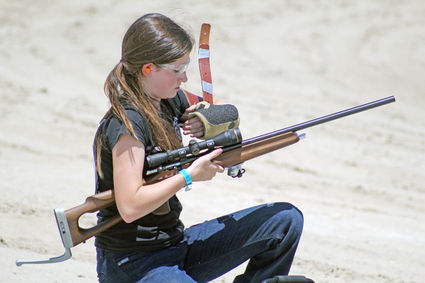 Abigail Gay, a competitor from Kentucky, readies her rifle for the next portion of the light rifle shooting competition in Green River Tuesday.

While much of the excitement focused on the National High School Finals Rodeo is in Rock Springs, Green River is also host to some of the competition.

Monday and Tuesday, competitors in the NHSFR light rifle event converged at the outdoor shooting range the city operates near FMC Park. The shooting sports competition also includes a trap shooting event, which takes place at the Sweetwater Trap Club in Rock Springs. According to information from the NHSFR, the shooting events were introduced to the rodeo in 2005 in partnership with the NRA.

Much like the rodeo itself, the shooting sports att...