Kids explore the ocean on land 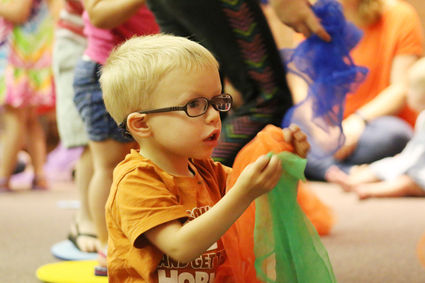 Reed Portile holds on tightly to his scarves before the children were asked to wave them around.

Children at the Sweetwater County Library Tuesday morning quickly realized they didn't have to travel far to learn about and explore the ocean.

During this week's story time, children listened to several books about the ocean, including how waves work and what's found in tide pools. They also listened to funny books about an octopus who thought he was bigger than everyone until he was eaten by a whale, a shark who's misunderstood and the blob fish.

While Youth Services Librarian Becky Iwen was reading this book and showing the children pictures of the blob fish and telling them how it's considered one of the ugliest fish in the ocean, when one kid couldn't contain himself and exclaimed "That's not ugly. It's cute."

It was pretty quiet for a room that was nearly packed with children listening to Iwen read the books. She even read the children a book that required a flashlight to see special creatures hidden on each page. She quickly told the parents there are many flashlight books available for residents to check out at the library and they are usually a hit with the kids.

When it seemed as though the children were starting to lose focus, Iwen would add a song to go with one of the books and get them refocused for the next book.

After the book reading was finished, Iwen told the parents their children could make a jellyfish out of coffee filters and streamers, paint an ocean and then sprinkle it with salt for a neat effect, use tongs to search in the sand for seashells or plastic ocean animals or play with the blob fish, which was really slime. The quiet room quickly became loud as children and their parents decided which to tackle first. Another surprise was when children finished their jellyfish creations, they could stick them in the air tube and watch them fly out. They would laugh and laugh as they tried to catch the jellyfish and then quickly do it again.

Every Tuesday at 10:30 a.m. story time has a different theme and activities to go with the theme.