Many new crafts created every week 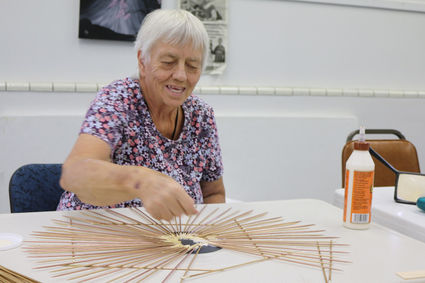 Above: Mary Carpenter carefully places another skewer on top of the mirror.

Each week, crafters arrive at Golden Hour Senior Center center ready to try their hands at a new project.

Thursday morning, a handful of crafters were working on various projects.

Craft instructor Judy McClellan said one of the crafts the ladies were making was a wooden skewer mirror. The mirror is created by attaching wooden skewers to the back of a round mirror.

However, the ones they were making cost a fraction of that price, between the wood glue, skewers and mirror. They also used hot glue guns to apply another layer of glue to the wood attached to the mirror when the wood glue dried.

Some even discussed how they planned to attach a clock to the front.

Others were making sun catchers, which were created out of flat-sided gems and clear glue.

McClellan said at first a pattern is placed in a plastic lid to make sure everything is where the crafter wants it. The pattern is then removed and clear glue is applied into the plastic lid. The gems are then placed on the glue. About one week later, the ladies pop the glue and gems out of the plastic lid leaving a sun catcher.

Theresa Stark had her own project she was working on, which was a kite made out of dowels, fabric and flowers. She plans on taking the finished kite on the side of her house.

Each week, the group works on a different projects. One week, they made a tricycle out of old CDs, a plastic butter container and popsicle sticks. The craft group is always open to new crafters. They meet at 10 a.m. on Thursdays.