Scholarships given to brothers

Full-ride scholarship opens to door to other opportunities 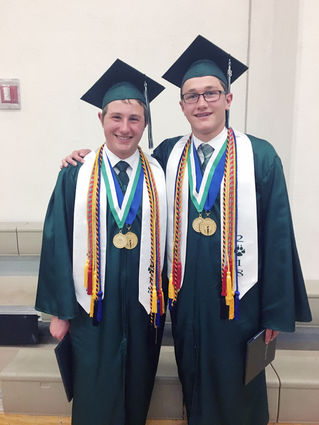 Patrick and Gregory Marchal pose for a picture at their graduation.

Finding out four years of college will be completely paid for is not only exciting, but a relief for one graduate.

Green River High School graduate Gregory Marchal is one of two students receiving a full ride from the STARR Charitable Foundation Scholarship to attend Michigan State University. The other student eceiving this scholarship is his twin brother Patrick.

According to a press release from MSU, "The STARR Charitable Foundation Scholarship pays all regular costs of eight semesters at MSU, including tuition, fees, books, room, board, and incidental expenses as defined by the university."

Marchal said he learned about the scholarship from his seventh-grade reading teacher, but forgot about it until he received an advertisement about it last fall.

"I figured that the foundation was offering an exceptional opportunity, and I had to apply for it," he said.

Not only did Marchal have to fill out an application, he had to write four essays and provide any other information the foundation wanted. Marchal said all of those who were finalists were interviewed by the STARR Committee in January.

"In addition to the scholarship, which makes attending the university essentially free, I felt that Michigan State offered many exceptional resources that I will be able to use," Marchal said. "I have already received a job on campus called a professorial assistantship, which will allow me to participate in research with a professor in my field as a freshman. I also received additional scholarship money to go abroad as an undergraduate."

But it's not just about the scholarships.

"When I visited the campus, I felt that there were a lot of resources and things to do for students," he said. "MSU is a very strong academic institution, and is recognized around the world because of this."

For Marchal, this scholarship has open the doors for other options.

"Essentially, it gives me the freedom to pursue opportunities and interests. For instance, when I go abroad, if the costs exceed my additional scholarship, I will have the freedom to pay the additional costs because I will not be pinching pennies like other college students," he said. "Also, the foundation gives us a very strong support group that can help me take care of any problems I have on campus. This will be very beneficial for me in such a massive campus; having access to these people will help me get the most of college."

Marchal was also impressed with what else MSU had to offer him.

"I really enjoyed the campus, and thought it offered everything a college student could want." Marchal said. "I thought the dorms were well maintained, and I liked the organization of the school into neighborhoods,"

Marchal plans to double major in International Relations from James Madison College and Economics. He is also considering a math minor. When Marchal isn't busy with his studies and job, he will try out for a spot on the club soccer team, play various intramural sports, join clubs with other economic students and volunteer.

Even though Marchal is excited about his scholarship and this great opportunity, he's not taking full credit for it.

"This would not have been possible without the support of my amazing parents, Andre and Krisena, who have been there for me every step of the way," he said. "Also, my brother, Alexander, has really pushed me to be the best person I can be in both activities, athletics, and in life. Finally, my twin, Patrick, who also received the scholarship, has been an excellent partner in crime throughout high school. We have competed and acted together in virtually everything we've done, and I would not have won this scholarship without him."

Marchal also wants to thank his friends, soccer buddies, teachers, coaches and advisers for believing in him throughout the past four years.