Game turns into a competition 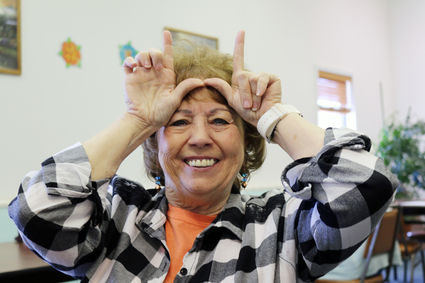 Terry Wood at first gave her opponent the L for loser sign, but then decided to make a W for winner sign instead

With two $25 Visa gift cards on the line, a game of UNO seemed to become a little more competitive.

At the Golden Hour Senior Center on Friday, activities and marketing coordinator Irish Kreis had a group of 12 woman playing UNO for the chance to win a total of $50 for first place and for second place a bag filled with various items, including a bracelet, notepad and Post It Notes.

Even with prizes on the line, the ladies remained friendly to one another, though at times they would seem to forget how the game was played and a discussion of the rules would ensue.

"I haven't played since the...