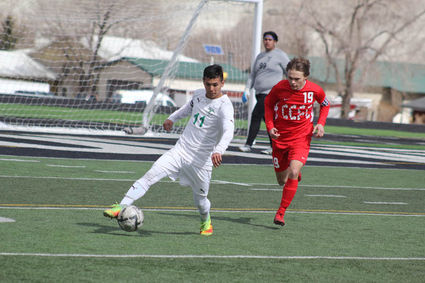 Christian Alatorre works to keep the ball away from a Cheyenne Central. Alatorre was the only player to score a goal Saturday.

The season didn't start the way the Green River High School boys soccer team wanted, but the season is young and head coach Chris Bieber expects the team to improve once players get back into their familiar groove.

The Wolves started the season with a tie and a loss last weekend at Wolves Stadium. Friday night, the Wolves battled Cheyenne East to a 0-0 tie, while they received a 2-1 loss at the hands of Cheyenne Central Saturday afternoon.

Despite working off the winter rust, Bieber said his players were doing what they were supposed to do on the field. The concern for Bieber at this point is making sure to work on his players' conditioning.

The team also competed without seniors Gregory and Patrick Marchal due to the brothers' commitment to speech and debate. The duo participated in districts in Rock Springs during the two games. Bieber said the Marchals won't likely be eligible to compete until the Wolves' meeting with Evanston Tuesday evening. Because the speech and debate season ends near the start of the soccer season, they are unable to attend the 10 practices needed to be eligible for play at the start of the season.

The Wolves' match with Cheyenne East was postponed and rescheduled three times Friday due to winter weather. Bieber said the Cheyenne East players were forced to make a detour on their road trip to Green River, traveling to Casper before making their way to Green River. The game ultimately started at 7 p.m., Friday night. With Cheyenne Central Saturday, Bieber said the boys played well, but had come up short against the visiting team. Christian Alatorre scored the Wolves' sole goal of the match.

Thursday, the Wolves will travel to Rock Springs for competition against their rivals. Action starts at 4 p.m. at Rock Springs Junior High School's football field. Bieber said he's expecting a tough group of Tigers waiting for them, saying the team has a few seniors and a group of underclassmen who stepped up last year.

Afterward, the Wolves will take on Evanston Tuesday in Green River. Action starts at 3 p.m. at Wolves Stadium.

Following their contest with Evanston, the boys will prepare for the Southwest Invite next weekend, which they will host in Green River April 6 and 7.