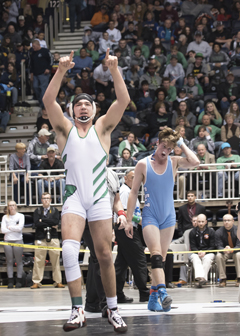 While Green River High School's wrestlers wouldn't get the third straight state title they sought, the Wolves still made an impression in Casper with two state champions crowned and four wrestlers being named to the All-State list.

Dominic Martinez and Payton Tucker fought their way to the top of the 106 and 182 weight classes respectively, while Jon Ty Leininger in the 160 division and Tanner Adam at 145 lbs., came up short in their championship bids and earned a spot on the 4A All-State list. Other wrestlers performing well include Clayson Mele, Kade Flores, Nathan McCann, Garrett Harris,...