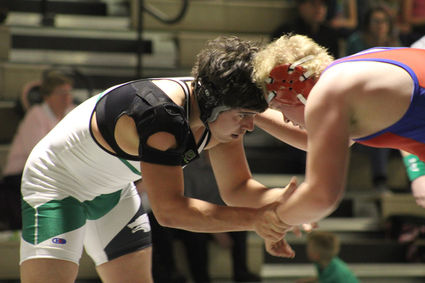 Justin Rubalcaba faces off against his opponent from Evanston last week.

Despite a narrow loss against Star Valley, the Wolves wrestlers has a successful week, earning victories against Evanston and Natrona County.

The Wolves defeated Evanston at home 43-26, but took the loss against Star Valley at SVHS 38-24, before turning things around in Rock Springs against Natrona 48-31.

"I thought we wrestled well," head coach Josh Wisniewski said. "I felt like the duel against Star Valley was a lot closer than the score."

Wisniewski said the wrestlers competed hard, but believes if they were a bit healthier and if a couple of matches had gone their way, the Wolves would...