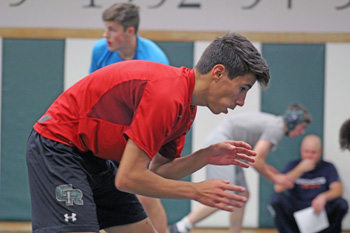 "I'm very excited to work with such a great group of wrestlers," Wisniewski said.

With a group of 37 wrestlers, including seven seniors, Wisniewski said he has a good mix of student athletes to build a strong squad.

The team has already set goals for itself, which include earning its third state title. Wisniewski said other goals his group have set, include winning the Ron Thon Memorial Tournament in Riverton, Green River's Thoman Invitational and defeating Star Valley at the upcoming dual with the Braves Feb. 1.

Wisniewski said Star Valley is a unique challenge for the Wolves as the school's wrestling program is very competitive and student athletes at Star Valley High School often work physical jobs, which helps prepare them for competition.

Star Valley is one of the many locations the team will compete at. While the Wolves will have the opportunity to compete at home during the Thoman Invitational and at a dual against Evanston after the Ron Thon, much of the competition the Wolves will face takes place away from Green River. Outside of those two competitions, fans of the Wolves can travel to Rock Springs and watch them compete at the Conference Duals Feb. 3 and at a dual against the Tigers Feb. 8. With nearly two weeks of practices under his wrestlers' belts, Wisniewski said they're working hard on the mat.