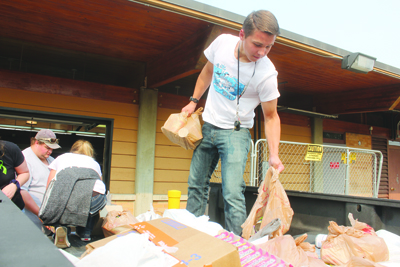 Dallin Hoyt picks up a couple bags containing food collected from a food drive he initiated.

More than 1,400 pounds of food were donated as part of an Eagle Scout project to help residents in Green River.

Thursday afternoon, Green River High School senior Dallin Hoyt brought a truckload of food to the Green River Food Pantry, the result of a drive he initiated Aug. 30. Hoyt said he started asking people about what would best help the community while considering his Eagle Scout project.

"(The food drive) stuck out as something that would help the community the most," Hoyt said.

Hoyt attached fliers on doors throughout the city, asking people to set their donations on their doorsteps...