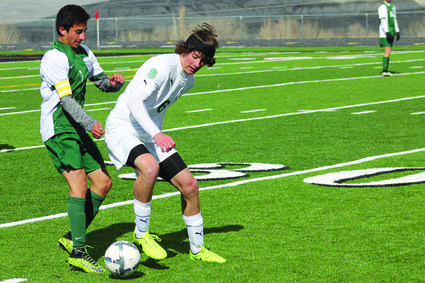 Chase Stoeger fights for control of the ball during play against Kelly Walsh Tuesday. The two teams would battle to a draw.

Taking on the Trojans at the GRHS field, the Wolves struggled to make a score despite multiple shots on the goal. The Trojans likewise struggled, having difficulty kicking the ball past goalie Patrick Marchal.

For head coach Chris Bieber, the first half didn't reflect the Wolves' ability on the field. Bieber said the team played better during the second half and in overtime. Overtime in high school soccer adds two 10-minute periods at the end of regulation play.

Beiber said the team wasn't ready for the extra 20 minutes of play time, but said they did well regardless.

Starting Friday, the team will take part in the Pinnacle Champions Cup Tournament in Worland, competing against Douglas at 1 p.m. The girls will play in the Todd Malonek Southwest Invitational in Green River this weekend. The local tournament is named for the assistant soccer coach who died last year. Beiber said they had asked for the tournament to have Malonek's name associated with the tournament as a way of memorializing him.

"What he did for soccer in Green River is unmatched by anyone else," Beiber said.