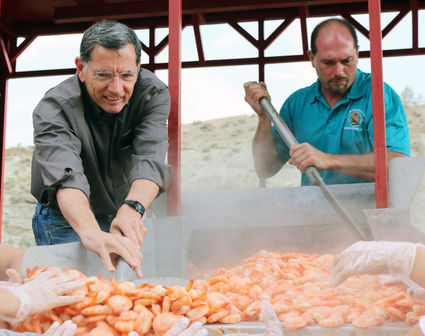 This year's shrimp boil was no different. Despite the chilly and windy conditions, hundreds of residents, along with Sen. Barrasso attended the shrimp boil.

While at the boil, Barrasso was put to work shoving the shrimp down to members of the Green River High School cheerleading squad who were placing the shrimp in styrofoam containers.

"I love this community and I love this event," Sen. Barrasso said. "It seems to get better every year."

Barrasso said this is a nice break from Washington D.C., and he really does look forward to this particular event every year. One big perk is the wonderful food he gets to eat, which consisted of cajun-style shrimp, sausage, potatoes and corn.

Green River wasn't the only place Sen. Barrasso was visiting on this trip to Wyoming.

He attended the Wyoming State Fair, a banquet at the Wyoming Agriculture Hall of Fame and a Wyoming Trauma Conference.

Sen. Barrasso said the conference was interesting to him since he used to be an orthopedic surgeon.

He also had a chance to talk with U.S. House of Representatives candidate Liz Cheney, R-Wyo.

Barrasso said he fully supports Cheney and wanted to let her know she has his support.

"It's important to keep the house in Republican hands," he said.

A lot of the economic problems Wyoming is facing, including oil, gas and coal struggles, are related to regulations put in place under President Barack Obama's leadership, he said.

"We have had it. We just want to be left alone," Barrasso said about Wyomingites.

"We can't afford a third Obama term; and that's what we would get with Hillary," Sen. Barrasso said.

Despite the economic problems Wyoming is currently facing, Sen. Barrasso knows Wyomingites will get through it.

"Wyoming is a strong and resilient state; and we will weather this storm," he said.