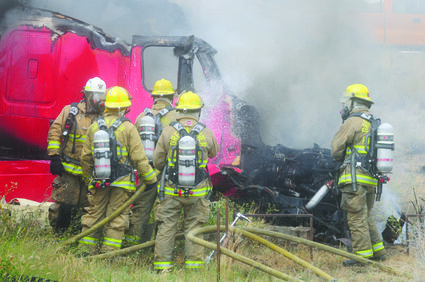 Firefighters from the Green River Fire Department spray water on a semi truck that had on caught fire after driving off of Interstate 80 and through a residential property Monday.

A Jamestown woman got quite a scare Monday afternoon when a semi truck veered off Interstate 80 and drove through a portion of her property.

The truck later caught fire, threatening a building at the residence at 13 Oxbow Drive in Jamestown.

Tara Boling was watching TV at the time of the crash, saying she heard a loud pop coming from the interstate. Boling said the sound isn't unusual as tires do pop as vehicles drive along the interstate.

"Next thing I know, I see a semi driving through our yard," she said.

The sounds coming next were unexpected as the semi, owned by Roehl Transport Inc.,...