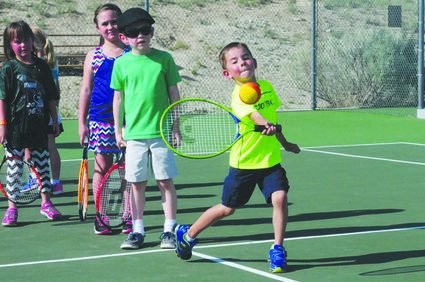 Kannon Torres swings his racquet during the final night of a training camp hosted by the Green River High School tennis team.

The Green River High School tennis team is passing their love of the sport to a new generation.

The team's first tennis camp attracted 31 students, ranging from first to eighth grade. Coach Phil Harder said the camp also functioned as a fundraiser for the team, as they charged $30 for the three-week camp.

Students learned the fundamentals of tennis, something smaller children don't typically have the chance to do in Green River. Harder said before the team started the camp, tennis players wouldn't often have a chance to learn before joining the middle school team. Through the camp, childre...