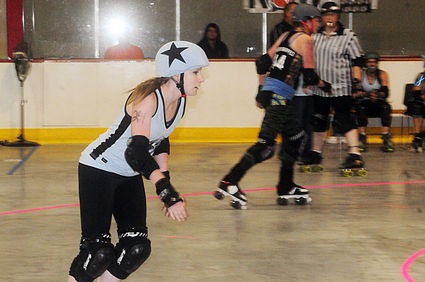 Cara "Caraxe" Kelsey skates around the oval track during a bout between the Bittersweet Bombshells and the Heart Mountain Wreck on Wheels Saturday. Kelsey was one of the jammers racking up points for the Bombshells for their 148-79 victory.

Revenge was in the air at the Rock Springs Family Recreation Center Saturday as the Bittersweet Bombshells defeat Cody's Heart Mountain Wreck on Wheels 148-79.

The Wreck on Wheels are no stranger to the Bombshells. Saturday was their third battle on wheels against the team and a tie breaker.

The Wreck on Wheels won the first bout the two had while on their home turf in Cody. The second bout against each other was on the Bombshell's home turf, with the Bombshells winning.

"We were really out to prove something," Grover-Roosa said.

The Bombshell's blockers and jammers came out fighting, pulling out all their tricks to establish a lead. Four minutes into the game, the bout was close, with the Bombshells at 59 points and Wreck on Wheels trailing close behind at 30 points.

"We love that team. We're really evenly matched," she said.

The Wreck on Wheels had a few new players in the bout, replacing retired or missing players. The Bombshells had a roster of mostly-seasoned players competing Saturday.

"They had some new skaters and that's always hard, and we understand that," Grover-Roosa said. "It's not a sport that people can play for a long time, it's a big physical commitment."

"Having our community behind us makes us feel so good," she said.

The point gap widened by halftime, with the Bombshells leading 80-32.

The Bombshells amped up their points and defense going into the second half of the bout. Jammers Cara "Caraxe" Kelsey, Grover-Roosa and Roxana "Freekshow" Thompson, who was named most valuable player jammer of the bout, made frequent laps around the track throughout the bout.

Bombshell jammer Amanda Wilson, using the alias "Pee Wee Hermaim" stood out during jam nine of the bout when she lapped the track five times without being stopped by the other team's blockers. She slid right past the pack multiple times. They saw her coming and blockaded much tighter her next go around. She stalled, wrestled a few feet and slid past again.

She lapped the group one more time and called the jam with two seconds left on the jam clock. Wilson's feat is a rare occurrence for a single jam.

"That was an epic jam for her," Grover-Roosa said. "That takes an incredible amount of endurance."

Grover-Roosa attributed their win to the team's blockers. The blockers keep the other team's jammers from accumulating points by blocking them from making laps around the track. KT Buff "Doppelganger" was named most valuable player blocker of the bout.

"Those blockers held it down very well," she said.