District No 2. educator retires, his legacy lives on 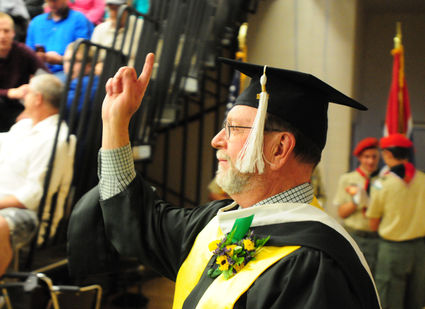 A less formally-dressed Dennis Freeman sported his University of Wyoming Alumni T-shirt Thursday, instead of his usual suit and tie attire.

The halls were devoid of students while Freeman, assistant principal at Green River High School tended to his end of the year duties and prepared for retirement.

The walls of his office adorned with native-american and Japanese artwork, scholarly quotes, framed diplomas, plaques of recognition, family photos and a photo from his first year of teaching; Mountain View High School's graduating class of 1984, will all come down.

Freeman has learned a lot about teenagers during his 33 years of working in the school system. At age 30, he was charged with building an art program when he started as an art teacher in Mountain View. He was there until the fall of 1990, when he started as an art teacher at Green River High School; he and Rudy Gunter shared responsibility of all art classes then. Freeman's career continued in the art room through 2006. He was an instructional facilitator for a short while, then Dean of Students for two years and has been assistant principal at the high school since fall of 2010 to retirement.

Freeman wanted two things when he started his career; to stay in the state of Wyoming and to make a difference.

"That was the main reason for going into teaching was to make a difference with kids," he said. "And especially once you've assured yourself that you are able to; not everybody can."

The most rewarding aspect of both his teaching and administrative positions are the same, he said.

"In each case, the result that matters the most is watching kids succeed and improve," Freeman said.

The difference is the varying ways in which he has to work to make those things happen.

"You get to work more closely with kids in the classroom and that's fun," he said. "I get to work with adults; teachers, parents, administrators, to make things happen and the adults are not nearly as much fun as the kids are."

Freeman realized during his first year of teaching just how much he was able to affect the lives of his students.

"I discovered really early on I was able to get students to see a reason to work hard and to be willing to cooperate with me," he said. "And then, once they've done that, to feel some real achievement at having accomplished something."

As time went on, he said, he got better at creating those cause and effect situations. The personal and physical energy he put into his teaching did not go unnoticed by his generations of students either.

"Part of the reason he's such a fantastic teacher is his great sense of humor," previous student Joselia Mendiolea said.

Lessons Freeman taught Mendiolea in high school, she's carried through the rest of her life.

"The ability to not be just an observer but to place myself within my work is something I carried all the way through architecture school and into my career," she said.

Another previous student who knew Freeman as the Dean of Students during her high school career, credits him with a great deal more.

"Mr. Freeman along with a small handful of people are the only reason I graduated high school," Taylor Mende said.

"Starting in the education field myself now, he is what I strive to be as an educator," she said. "He takes a genuine interest in his students. He cares so much and he pushes his students to work hard because he wants us to succeed."

Freeman's relationship with high school students has evolved over time and so may have his understanding of them.

Some may say high school age kids have changed; he would disagree.

"I don't think students have changed, what's changed is the culture around them," Freeman said.

Plainly stated, they want to affiliate with something bigger than themselves, he said, but if they can't, they'll reject it.

"They are at an age where they are making decisions on how they will interact with the world," he said. "They're in a unique place to be."

School district number two may be losing an assistant principal and esteemed educator this year, but Freeman's legacy is forever left behind in the success of his students; the adults of yesterday, today and tomorrow.

"It's been a pleasure and honor to work with students this long," he said. "To the students: Thanks."