Saying goodbye to a mentor 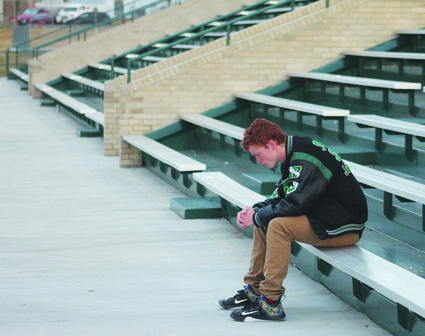 Remembering coach Todd; Kalen Kester sits on the bleachers at Wolves Stadium Saturday night and gathers his thoughts before joining friends and teammates in honoring coach Todd Malonek at a candlelight remembrance on the field. Malonek died Friday at the age of 56.

Standing under a dark sky and holding Styrofoam cups containing lit candles with the words "for Todd" written on the side lit, the group formed a circle around the large GR at the center of the field. Holding those cups long after the Styrofoam started to melt and speaking through both smiles and tears, they spoke about the impact he had on their lives.