Professor of the year 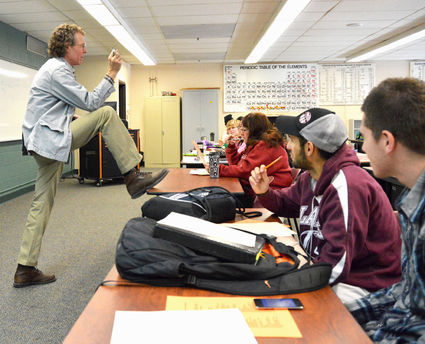 The Carnegie Foundation for the Advancement of Teaching and the Council for Advancement and Support of Education (CASE) have named Professor of Earth Science and Engineering Craig Thompson of Western Wyoming Community College as the 2015 Wyoming Professor of the Year. Thompson, who retired from active teaching at Western in June but who remains active in research at the campus this year, was selected from among more than 300 top college educators in the United States.

"I've just been blessed by having great colleagues to work with through the years," Thompson said this week. "I've basically learned how to teach from my colleagues here at the college. It's great testimony to the strength of the faculty here, when you can learn how to teach from the people you work with. And I've had great students, and I've had a supportive administration that just basically let me go and try all kinds of different things. Some things didn't work, but I stuck with the things that did. It worked out well."

Thompson offered his thanks to Western President Karla Leach, who nominated him for the Carnegie honor, and to those who wrote letters on his behalf or otherwise supported his nomination.

CASE and the Carnegie Foundation have been partners in offering the U.S. Professors of the Year awards program since 1981. Additional support for the program is received from Phi Beta Kappa, which sponsors an evening congressional reception, the Professional and Organizational Development (POD) Network in Higher Education and other higher education associations.

This year, a state Professor of the Year was recognized in 35 states. CASE assembled two preliminary panels of judges to select finalists. The Carnegie Foundation then convened the third and final panel, which selected four national winners. CASE and Carnegie select state winners from top entries resulting from the judging process. Thompson was selected from faculty members nominated by colleges and universities throughout the country.

Leach commended Thompson's selection as a testament to the brand of quality education that has long been practiced by faculty at Western.

"Western Wyoming Community College has an outstanding tradition of faculty excellence and engagement, and Craig has very much been a part of that," Leach said. "He has always taken a global approach to teaching his students about the environment and engineering and how the jobs that they will perform impact so many aspects of our everyday lives.

"One practice that always impressed me was that Craig would take his first-year engineering students on field trips to visit the different companies where they might work one day," she said. "Then, in the spring semester, he would compile their photos and résumé information and send that out to these companies so that our students could get internships.

Thompson's history at Western began in 1970 when he attended the college as a student.

He graduated in 1972, transferred to Colorado College, graduated from there and later earned his graduate degree from Stanford.

Thompson returned to Rock Springs to run the Water Quality Lab for 20 years before moving into the classroom, where he has educated and inspired two decades' worth of engineering and earth science students.

The results have been tremendous. From research projects in the Wind Rivers, where he has conducted important work on Wyoming's glaciers, to Wyoming's Wind Racer competitions, which Thompson's students have won the past two years, and from engineering lessons in the campus Aquatic Center pool to giant slingshot demonstrations outside of its Atrium, Thompson has passed on his knowledge to students who have utilized it to advance themselves intellectually, academically and professionally.

Thompson's students have gone on to earn master's degrees and Ph.D.'s and to work in significant positions with regional industry. Their success is reflective of his instruction and their talent and dedication. And their praise, even years later, demonstrates the impact he's had on their lives.

Thompson's former student, R. Brock Sherman, who now serves as Process Engineer for Marathon Oil Company, said that his professor made the complexities of studying engineering both challenging and enjoyable.

"These challenges prepared us well for survival in advanced engineering courses and also in life," Sherman said. "Craig is unique in that he finds the time in his busy life to help those students he has stewardship over!"

Hiroko Kokubu, one of Thompson's former international students from Japan, recently contacted Thompson upon hearing of the educator's retirement.

"You are still my favorite professor," wrote Kokubu, who now works for a crane manufacturer as an homologation engineer. "I believe that you showed me how to find and walk my future in Rock Springs.

"I won't forget you and your lectures," he added.

Thompson said he hoped that his recognition by Carnegie and CASE would encourage his colleagues at Western to better recognize their own achievements and the many ways in which they strengthen their students and the institution.

"We don't realize how good we are at the college. There is a reason that we are the No. 7 community college in the country," he said, referring to the most recent Washington Monthly College Guide national ranking of community colleges, which was released in 2013. "It's because of the people who have been attracted to this school who concentrate on the positives and make a contribution."

The Carnegie Foundation for the Advancement of Teaching is an independent policy and research center that supports needed transformations in American education through tighter connections between teaching practice, evidence of student learning, the communication and use of this evidence, and structured opportunities to build knowledge.

Headquartered in Washington, D.C., with offices in London, Singapore and Mexico City, the Council for Advancement and Support of Education is a professional association serving educational institutions and the advancement professionals at all levels who work in alumni relations, communications, fundraising, marketing and other areas.