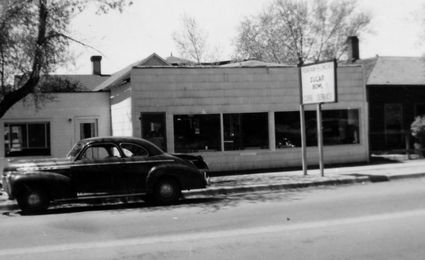 An outside photo of the Sugar Bowl taken between 1945-1950 depicts a normal white building with a sign out front.

The Sugar Bowl, which was just a white building with a white sign in front of it on Flaming Gorge Way, was the main hangout for teenagers.

Green River Resident Richard Watson said he can recall the summer of 1947, he was 23 then and had returned with a seismograph crew to look at an oil expansion project.

"I was a little bit old for the Sugar Bowl, because it was kind of a teenage place and I was 23," Watson said.

However, that did not stop him from at least checking the place out. According to Watson, there were places like the Sugar Bowl all over the country.

It was the popular thing at that time.

"It was for the local kids," Watson said. "It was typical for the time."

Like the Sugar Bowl, these places had soda fountains and soda jerks, who were usually teenagers, to help run the fountain. There were also booths, a jukebox and a counter in most of these kinds of establishments.

"They were able to control the crowd by the type of music they played," Watson said.

If a customer wanted to hear their favorite song, it would have cost them a nickel.

The Sugar Bowl had a little room for people to dance, but Watson did not think that was part of the plan. It just sort of happened. Some of the music that was popular back then were big bands, which featured musicians like Glenn Miller and Harry James.

What impressed Watson the most about the Sugar Bowl was when he ordered a burger it was made just for him.

"Everything was made for you. It was fixed just the way you like it," Watson said.

Watson said the place was also known for its shakes, banana splits, burgers and of course pop. A glass of Coke would set one back a nickel, a milkshake was a dime and a hamburger cost a quarter.

"You can take your girlfriend out and for a dollar you have feed her royally," Watson said.

It was something teenagers could afford and they liked the taste of the food.

Carla Mosley Purcella worked at the Sugar Bowl from 1969 to early 1971. She recalled that one of her favorite customers would come in for a "timber float," which was a glass of ice water and a toothpick. He couldn't afford anything else.

She also recalled one time how generous two young boys were.

"I also got a fabulous tip from two very young boys once," she said. "They counted their pennies to make sure they had enough for their ice cream and a 5-cent tip."

When Purcella wasn't working there, she recalled how she and Bink Realing had the best times at the Sugar Bowl. She said a bunch of students from Lincoln High School would spend a lot of time at the Sugar Bowl buying a Coke for a quarter and eating in their opinion "the best French fries ever." They put pepper in their ketchup before dunking their fries in it. She said she still adds pepper to her ketchup today.