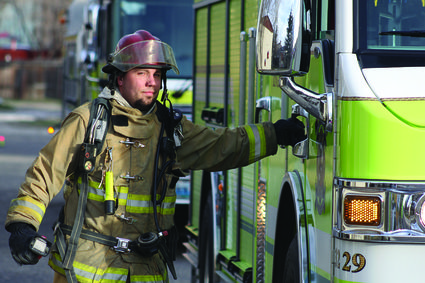 Lt. Austin Rider prepares to leave the scene of a house fire Tuesday night. While the fire was knocked out by the time firefighters arrived, they stayed to ensure the fire was out and helped ventilate the home.

The fire department received the house fire call at 6:07 p.m., responding to 455 East Fifth South Street. Fire Chief Mike Kennedy said the fire started when the resident was cooking a meal. The fire ignited from the stove top, quickly burning the overhead cabinets and scorching the ceiling. After the department was contacted, Kennedy said the resident was able to kill the fire by the time the emergency responders arrived to the scene.

"The gentleman who lived there did an excellent job knocking it down...