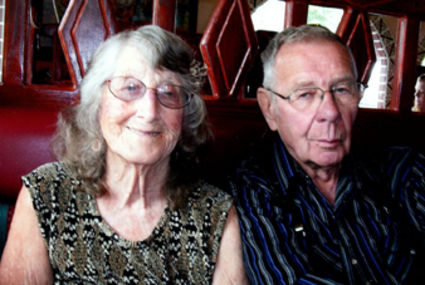 Ron and Darlene (McElroy) Wiebe were married 65 years ago in Carlton, Ore.

They have three children Diana and Larry Wheeler of Bend, Ore., Linda Niday of Sheridan, Ore. and Michael and Charlotte Wiebe of Lebanon, Ore.

The Wiebes moved their family to Green River in 1968 when Ron was transferred with El Paso Natural Gas Co., where he worked as a welder for 15 years. He later worked for Questar for 10 years before becoming an independent pipeline inspector. Darlene worked briefly for Ray's market.

The couple enjoyed walking the desert and driving the back roads of Wyoming.

Darlene has been a TOPS member since 1968 and attained her TOPS status. She currently attends a TOPS group in McMinnville, Ore.

Ron completed the restoration of a 1936 Dodge truck in 1999, which was just in time for their 50th wedding anniversary.

The family piled into the bed of the decorated truck and drove down main street of Green River. They then drove to a family barbecue on the river. The next morning Ron drove his bride to church in his truck in celebration of their special day.

Ron and Darlene were active members of the Monroe Baptist Church for many years. Occasionally, they ministered to outlying churches throughout Wyoming who were without a minister.

In 2003, after residing in Green River for 35 years, Ron and Darlene moved to Sheridan, Ore., to care for Darlene's mother, the late Dorothy McElroy. Ron and Darlene enjoy driving their restored truck in the annual Sheridan Days Parade.

After 65 years, Ron and Darlene still enjoy driving the back roads of their old stomping groups around Carlton. All the time they remember their days gone by when their love first began and about how they will create new memories for years to come.