We're all mad here at the library 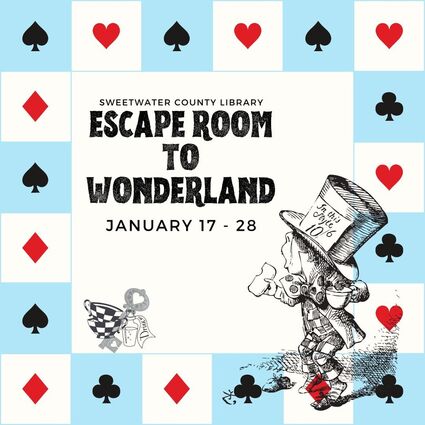 The Sweetwater County Library will be transformed into the mad world of Lewis Carroll's classic books with its Escape Room to Wonderland and this weekend's Alice in Wonderland Party.

These events are based on a brand-new literary theme for the library, but they also build on the success of past events.

"We have celebrated national tea month in previous years and it was really well-received," Youth Services Librarian Becky Iwen explained.

Since January is national tea month, the library offers free tea all month long, providing all the supplies needed for patrons to have a nice hot cup of tea while they're browsing for books. This year the library has teamed up with Stellar Coffee to offer coupons as well.

With the theme of tea already established, the library staff also realized January is the birth month of famous author Lewis Carroll, who is most well-known for writing "Alice in Wonderland" and "Through the Looking Glass." Since tea goes hand-in-hand with Wonderland, the librarians decided to host some new events based on the classic books.

"It's fun to try something for the first time and add on to things we've done in the past," Iwen said.

The Escape Room to Wonderland offers patrons a chance to work as a team to discover clues and decipher puzzles in order to "escape." Iwen recommends having groups of between two to eight people. Children under twelve are welcome to participate as long as they are accompanied by an adult.

The Alice in Wonderland Party, which will be hosted at the library this Saturday afternoon, will include a Mad Hatter's tea party, hat contest, and several other Wonderland-themed events throughout the library, including indoor croquet and "Pin the Grin on the Cheshire Cat."

Those who want to participate in the hat contest are encouraged to stop by the library before the party. There will be a hat-making station, where the library will have example hats and supplies for patrons to make and decorate their own hats.

While the Wonderland party may not be as big as some of the other parties the library hosts, such as the annual Harry Potter party, it will still offer plenty of fun for all ages. Many of the activities will be set up as stations where patrons can participate on their own. Iwen explained this party will be a little more casual because there are less people to help with it and there was less time to plan it.

The Wonderland party may also be a special one-time event. Iwen noted that she loves having annually returning traditions, but also wants to make sure there's always a wide variety of events at the library so it's not just the same things every year. She said it's always a balance of "finding new things to try as well as those favorites that people look forward to and get excited about."

In the coming months, the library will continue to offer both new options and returning favorites.

One new resource is the library's puzzle collection, which will be starting up next week and follows on the success of the game collection. Another new event will be two different escape rooms coming up in February as part of the library's partnership with Green River High School to raise money for Make-A-Wish.

A returning favorite event coming in March will be the Peeps Diorama Competition, which was a huge success last year, according to Iwen. Patrons are encouraged to create dioramas based on literature using the Easter candy Peeps. Participants compete in several different categories, and can also win the "Peeple's Choice Award." Last year the event had around 70 entries, Iwen estimated, and she's already been asked if it's happening again this year.

For Iwen, it's always fun to come up with plans for new and unique things the library can offer.

"There are so many different resources for ideas and literary themes," Iwen said.

She likes looking at ideas from other libraries, and will often think about or discuss ideas for several years, but in the end it comes down to taking the ideas and making them a reality, like the Wonderland-themed escape room and party.

Those wanting to participate in the Escape Room to Wonderland should contact the library to set up a time reservation. Everyone is welcome to attend the Alice in Wonderland Party at the library Saturday, Jan. 21, from noon to 2 p.m. The hat contest will be held at 1 p.m.