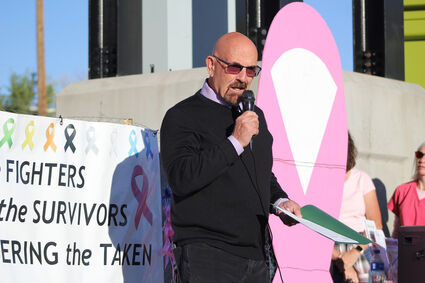 October is a month set aside for raising awareness for a variety of causes, many of which were recognized this week through events and public proclamations.

Breast Cancer Awareness Month was also recognized in a kick-off event Tuesday afternoon at the clocktower in downtown Green River. Anyone could stop by to tie a ribbon on a display in honor of those they know with cancer, with different colored ribbons representing different types of cancer.

"Even though it is breast cancer awareness, we do allow everybody to tie [a ribbon] for any type of cancer because oftentimes it's multiple types of cancer in a family," Lena Warren, the Community Outreach Director for Memorial Hospital of Sweetwater County, explained about the event.

The event was the first part of "Paint the Town Pink," a campaign Sweetwater Memorial hosts each year to raise awareness.

"Paint the Town Pink" is funded by a grant from the Wyoming Breast Cancer Initiative. This year funding from the grant will be put towards gas cards and lodging vouchers for patients who have to travel to get treatments, Tasha Harris, the Sweetwater Regional Cancer Center Director, explained.

One of the focuses of "Paint the Town Pink" is encouraging women over 40 to get their yearly mammogram screening.

"Ultimately it's just about getting screened and getting in and taking care of yourself," Warren explained. "The sooner the better with cancers."

"So we're catching cancer sooner," Soller said. "Catching it when it's small, when it's treatable or easier to treat, that's the whole purpose of screening."

Screenings like mammograms are usually covered through insurance because they're considered preventative care, Warren explained, and for those who don't have insurance, the hospital can point them to programs through Wyoming Cancer Resource Services to help them get screened.

Having a month set aside to raise awareness is important because people often have to hear something multiple times for it to sink in or will wait until something affects them before they realize how serious it is, Warren said.

Mayor Pete Rust was also present at the ribbon tying event to read the proclamation recognizing October as Breast Cancer Awareness Month, which he read again during the city council meeting.

Domestic Violence Awareness Month was recognized with proclamations at both the city council meeting and the Sweetwater County Board of County Commissioners meeting Tuesday morning.

This month "provides an excellent opportunity for citizens to learn more about preventing domestic violence and to show support for the organizations and individuals who provide critical advocacy, services and assistance to victims," according to the proclamation.

"We desire for the community to know that domestic violence does happen in our community," Chelsea Cortez, the YWCA of Sweetwater County Shelter Manager, said during the city council meeting. "More importantly, we want to reach out to those who may be experiencing domestic violence and let them know services are available."

The YWCA of Sweetwater County serves hundreds of domestic violence victims each year, according to Cortez. In 2021, the YWCA Center for Families and Children assisted 427 clients, and YWCA provided 2,549 shelter nights and assisted with 205 protection orders, Cortez explained.

The YWCA of Sweetwater County will host the annual Silent Witness Memorial Oct. 20 at 6 p.m. at Western Wyoming Community College.

Pregnancy and Infant Loss Awareness Month exists to remember and honor the lives of "children taken far too soon" and to support "grieving parents, grandparents, siblings and other family members whose lives are forever altered by the heartbreak of losing a child," according to the proclamation, and to promote awareness of the challenges experienced by these families and enable people to help meet their needs.

Courtney Swanson presented about pregnancy and infant loss awareness at the city council meeting, explaining the month was originally designated for raising awareness by President Regan in 1988 after he and his wife lost two of their babies.

"It's important for us as a community to validate these tiny lives by helping families feel they're not alone in their grief journey," Swanson said.

Swanson pointed out Inside Connection, a local pregnancy resource center, is now opening support groups for both miscarriage and post-abortion, which is "the first time that this kind of support is being offered in our community."

Swanson also handed out flowers to those at the meeting who have experienced pregnancy or infant loss, including some council members.

Fire Prevention Week is observed from Oct. 9 to 15. This year's theme is "Fire won't wait, plan your escape." Citizens are encouraged to plan and practice a home fire escape and to support the Green River Fire Department and Emergency Services.

"Fire Prevention week is put together in memory of the Great Chicago Fire, which started October 8 and ended October 10 of 1871," Erdmann explained.

Studies were done that found modern homes burn faster than old homes, according to Erdmann, which makes it even more important to have an escape plan to get to safety before the fire department can get there. Erdmann also pointed out the importance of checking the batteries in fire alarms and making sure they're working, since they can also make a big difference in safety. 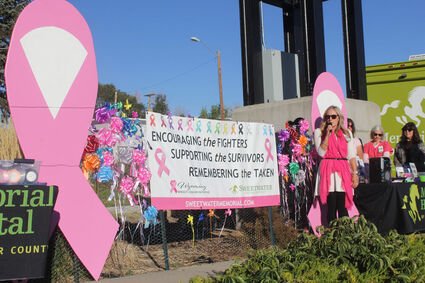 All four full proclamations can be read on the city's website under the City Council agenda.