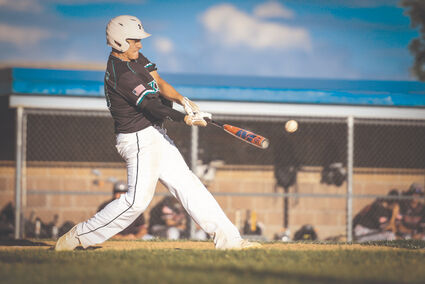 Jax Peterson crushes the ball during a conference game in Green River.

The Knights A team hosted a double-header conference game July 2 taking on the Riverton Raiders A team.

The first game was a 8-6 victory with Jax Peterson pitching all seven innings, allowing six hits, six runs and striking out two with one walk. The Knights scored 3 runs in the third inning from Dallyn Smith, Jace Paoli and Skyler Lee, and had a total of six hits for the game with multiple hits from Peterson and Smith. The Knights tore up the bases and two players were able to steal at least two bases, with Peterson leading the way with four steals.

The second game was a 7-17 loss for the Knights. The Knights unfortunately let Riverton's offense get ahead and couldn't recover. Hitters Quentin Liebelt, Paoli and Marcos Molina all showed up for the seventh inning scoring runs but fell short of taking the lead. Ashton Eldredge pitched a tough game, allowing nine hits and eleven runs and striking out six. Lee and Molina were relief pitchers for an inning and two-thirds of an inning during the game.

The Knights A team is currently placed second in the Southwest Division. 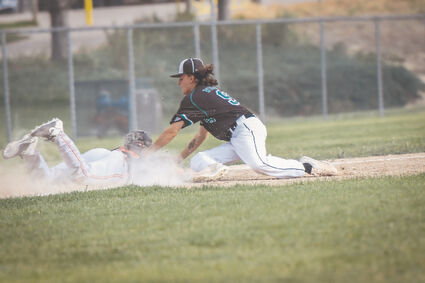 Lander Welch tags a runner at 3rd base against Riverton.