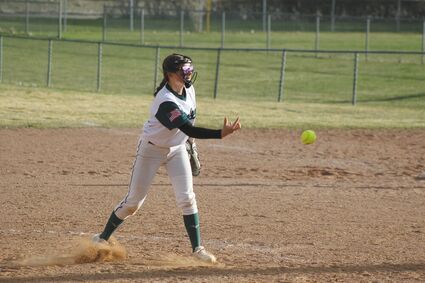 Pitcher Haidyn Terry throws a pitch against Natrona last week. Terry was able to throw a no-hitter in the first game the Lady Wolves played Friday, which ended in an 11-0 win.

The Green River High School Girls Softball Team will be heading to their match against Rock Springs today with confidence after two huge wins and a no hitter last week.

The team beat both Natrona County and Kelly Walsh in their conference games, and the Natrona County game last Friday included a no hitter pitched by freshman Haidyn Terry.

A "no hitter" refers to a game where there are no hits against the pitcher. While runners may still be able to get to bases off a walk or an air by an infielder, the Green River game had not only no hits but also no airs and no runs. A perfect no hitter occurs when no runners reach base.

"Hayden only had one walk, which is one walk away from a perfect game," head coach Blair Aimone explained, adding this accomplishment is "pretty impressive as a freshman."

Aimone said achieving a no hitter is super special because of how hard it is to accomplish, and not only was it great pitching from Terry, but it showed how well the whole team came together.

She said the defense stayed strong, the team got good diving plays, and there were other stand-out moments including a beautiful catch in the outfield by Natalie White.

The Lady Wolves ended up winning the no hitter game 11-0 against Natrona County.

"It really takes a team effort in order for that to happen," Aimone said. She also noted the defense in particular is starting to click, and defense wins games, so the game demonstrated "what happens when we can play solid defensive softball."

The Lady Wolves also had success against Kelly Walsh during their conference game Saturday, which was an air-free ballgame Green River won 2-1. Although Kelly Walsh scored the first point, the Lady Wolves fought back, scoring two of their own points and playing tough defense to keep their opponents from scoring again.

"The girls battled and we had some timely hits," Aimone said. "And the biggest thing is that we just didn't give up and we didn't let them get in our heads."

Green River wasn't mentally prepared for the second game against Natrona County, according to Aimone, especially since their opponents seemed to have a chip on their shoulder after having a no hitter pitched against them, so they came out hitting hard.

The Lady Wolves were down in the first half, but after a pep talk Aimone had with the girls in between innings, the team rallied to get more points and play better defense.

The Lady Wolves also fought back in their second game against Kelly Walsh despite the ultimate loss. Aimone said the girls played hard and she's not disappointed in the results since nobody can play a perfect game every time.

"We've just got to move on from that and continue to get better every single day and these girls are doing that," she said.

Especially when she thinks back to last year, when the Lady Wolves didn't win a single game, Aimone is proud of how far the girls have come. Last year, both Natrona County and Kelly Walsh annihilated Green River, according to Aimone, while this year the Lady Wolves have not only competed closely with the same teams but beaten them.

"For these kids to see that they can actually play with these teams I think is a huge confidence boost for them," Aimone said. "Us coaches knew they had it in them all along. This isn't shocking any of us. They just needed to see it and believe it for themselves."

That confidence will come in handy in today's game against Rock Springs, which is especially significant since Green River is currently in a three-way tie for second place with Rock Springs and Kelly Walsh in the regional conference standings. Aimone is confident about the game, especially since the Lady Wolves have already beaten the Lady Tigers this season.

"I know the kids are pumped, and they're ready," she said.