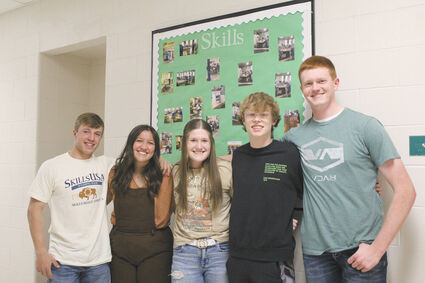 Branson Barton, Alicia Harrison, Allysa Cudney, Xander Lindsey and Cole Murray stand together in front of the SkillsUSA picture board at Green River High School. These five students were among those who competed in this year's Wyoming SkillsUSA competition and brought home medals.

A group of Green River High School students recently proved their skills while competing with high school students from across the state during the Wyoming SkillsUSA state championships.

The SkillsUSA Championships include contests in a variety of technical categories involving both knowledge and practical skills. The Wyoming state competition was hosted in Casper April 11-13.

"Their pledge is preparing students for the world of work," Murray said, describing SkillsUSA as similar to boy scouts, but for the trades.

Murray and many of his fellow students who participated in SkillsUSA this year started last year after being invited by their teachers to join. Murray was asked to compete by Tim Cassity, one of the Industrial Technology teachers at the high school who takes students to the SkillsUSA championships each year.

While Cassity has been taking students to compete for over a decade, no students had stood on the podium before last year.

"I really wanted to win for Cass because nobody else had won," Murray explained.

Last year when he asked him to join, Cassity told Murray to get a feel for the competition as a junior and come back to win as a senior.

"Not to brag, but I won junior year and then I went back and won this year," Murray said with a laugh. "The reason I went back this year is because I had a lot of fun last year, and I took third in nationals and I want to win nationals this year."

The other students who competed this year had also been invited by their teachers. Harrison explained students in sports medicine classes, including herself, were chosen to compete in Medical Terminology based on their knowledge and willingness to learn.

Barton said he was asked to compete by his teacher, Julia Gotfredson, who teaches Industrial Technology and welding.

"I don't know if you'd say I'm the best welder in the school," Barton said. "There's definitely a lot of good welders in our class, but she just asked me. I was one of the kids that she trusted and thought was a good welder in her class. I've been the first to go in eight years and place."

While the students who participated in SkillsUSA were excited to win and enjoyed the competition, they also said they learned practical skills from the experience.

Barton also said he learned about working in a time limit during his welding competition, and added "working slow can be fast." He explained although he didn't finish the last section of his welding competition and lost points because of it, he was still able to make it on the podium because he worked slowly and carefully and made sure everything was precise.

Murray agreed with the importance of working slowly, noting many students in the cabinetmaking competition cut corners and finished early, but he used every minute available to him to make sure he turned in quality work.

"I just learned that anything you do, even taking a test or something, you should use all the time," Murray said. "You have to make sure every little detail is right."

For the members of the Knowledge Bowl team, the competition provided extra lessons because of the uniqueness of working together instead of competing as individuals.

"You definitely learn how to be a leader," Lindsey said. "You learn how to bring a team together and work as a team and appreciate and respect everyone's ideas even though they might be different from one another."

Cudney pointed out the Green River team had the advantage of working well together. While they saw other teams having conflict during the competition, they were able to come together and strengthen each other.

Harrison agreed and said she prefers being part of a team to having to compete individually.

"I definitely think it's much easier when you have your team with you, because you have all of your brains working together opposed to working alone," she said. "We have each other and we all have different strengths and weaknesses."

The students are also confident the lessons they learned will help them not only now, but in their futures as they enter the workforce.

"It's a good experience that teaches you how to be professional, teaches you what it's like to be at a job site or a real job," Barton said. "It just teaches you good employment skills and how to be a good worker."

"I think it definitely has prepared us," Lindsey said. "That sense of competition is definitely getting us ready for the workforce and the competition that we're going to face there finding jobs."

"I think it makes you feel way more comfortable in your environment and just makes you overall feel better and more confident," Cudney added.

The students who participated in SkillsUSA this year hope other students will continue to be involved in the competitions in the future. Murray explained GRHS could form a chapter and compete in more competitions with other schools if more students were to join.

"We can do really well at these competitions, we just have to have kids that are willing to go," Murray said.

"I'd say go for it if you're thinking about doing it," Lindsey said for other students thinking of getting involved. "I think whatever you go into, you'll learn something and I think you'll appreciate your time spent in SkillsUSA."