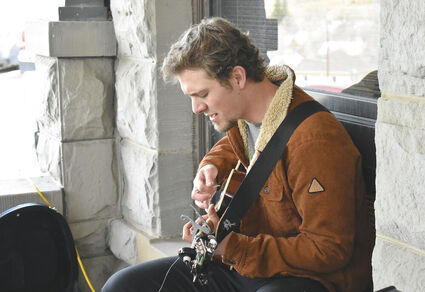 Andrew Kneeland plays guitar and sings during the ribbon cutting and open house for Inside Connection, a local pregnancy resource center. Andrew is part of the newly-formed band "Greasewood Redemption" that performed in front of a crowd for the first time at the event last Saturday.

Inside Connection, a local pregnancy resource center, has moved into a "new" Rock Springs location that is more than 100 years old.

"This building is amazing," Inside Connection Executive Director Kim Seymour said during a ribbon cutting ceremony Saturday. "It has history and it's beautiful. And it just is the perfect place for us because it's a little more private."

The three-story stone building next to the former county hospital was originally used as the nurses' quarters when the hospital was in operation. Seymour said the land the hospital and nurses' building were built on was originally given to Sweetwater County by the Union Pacific Railroad. The agreement stipulated the land should be used for health or medical purposes. The buildings are maintained by Sweetwater County, otherwise they will revert back to UP ownership according to the original agreement.

Prior to Inside Connections moving in, the nurses' building has been empty for four years.

Seymour was walking with her husband one day when she saw the building and realized it would be the perfect place for Inside Connection, which was looking for a new home.

The pregnancy resource center has been operating out of a building on Commercial Way since its opening in 2014. A few years ago, the staff realized they needed to find a new space for multiple reasons. They couldn't see more than one client at a time, and the building was not accessible according to the Americans with Disabilities Act since clients were required to go up and down stairs. The staff also wanted more space to expand existing services and programs.

"So we just started looking and praying," Seymour said.

The process of finding a new building presented several challenges, including finding somewhere that met the specific needs they were looking for, trying to get a lease as a donor-funded nonprofit, and getting slowed down by the COVID-19 pandemic.

At the start of this year, however, things finally started to come together. Seymour and other Inside Connection representatives went before the Board of County Commissioners to present a proposal for leasing the county-owned building. They received approval for the lease on the same day someone committed to buying their old building. The move from Commercial Way to the historic nurses' building happened in March, and the staff has been taking time to focus on getting settled in.

Throughout the process, Seymour has been grateful for the help and support of many people. Seymour started working with Inside Connection as the nurse manager in 2015 and became the executive director last July. She is thankful for all her fellow staff members, for those who first had the vision for a local pregnancy resource center back in 2002, and for all the volunteers and donors who help keep things going.

"Just seeing everybody's prayers and all their financial support, we're like 'okay, we're finally here, where they saw it years ago," Seymour said. "Now's the time for harvest, and so it's everybody's harvest - our community, our donors, previous board, previous staff. So we love sharing it today. And we know it's a God-given thing that has happened."

Inside Connection is the only faith-based, pro-life pregnancy resource center in Sweetwater County, and one of only a dozen or so in Wyoming.

"It's important because we offer services that no other entities here can provide for them," Seymour said.

The center offers services including pregnancy testing, limited OB ultrasounds, abortion pill reversal treatment and information and education. Seymour explained they are also hoping to add more services, classes, and support programs, such as a perinatal diagnosis program and miscarriage and post-abortion support groups. All services offered by the center are free of charge.

Inside Connection currently has four paid staff members, and everyone else is volunteer, including the board. The center also focuses on having trained and qualified staff and volunteers.

"We operate under a medical director," Seymour explained. "He signs off all of our medical policies and procedures. He writes standing orders for the pregnancy testing, the ultrasound, prenatal vitamins. And then he oversees our medical staff, which right now is our nurse manager."

The center is currently looking for a new medical director since the previous one retired, but not currently having a director has allowed the staff to focus on getting moved into the new building.

"It's allowed us time to get prepared to see clients again," Seymour said. "It's a process."

While the process has been challenging, it's also been rewarding, and Seymour looks forward to the future Inside Connection will have inside the historic nurses' building, carrying out services connected to what the center's new home was built for.