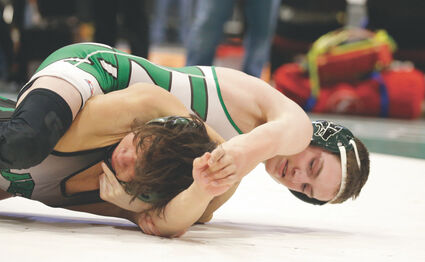 Courtesy of the Douglas Budget

Spencer Wright grapples with his opponent at the state wrestling tournament in Casper. Wright took second at 106 pounds.

The Green River High School wrestling team came back from state with two state titles and a third-place finish.

The team finished behind Star Valley and Douglas in 3A.

"I'm very proud of how our team competed this weekend. The wrestlers showed a lot of heart and determination," head coach Josh Wisniewski said.

Tommy Dalton and Kale Knezovich earned state titles at the tournament, both of which being their second state championship.

In all, eight wrestlers placed at the event. Spencer Wright secured a second-place finish, while Zach Wiepert and Conner Todd took fourth. Ryker Mele and Jam...