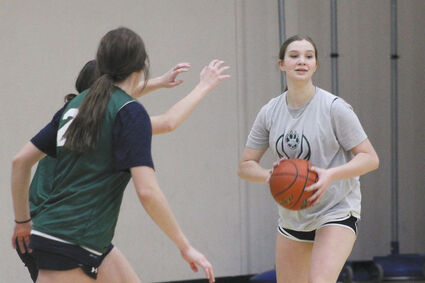 After a strong season last year, the Lady Wolves basketball team is ready to come back strong and keep improving.

Last year the Green River High School girls basketball team finished in fourth place after being beat by Cheyenne East High School in the semifinals of the state championship.

"We had a good year, we won a lot of games, we were very competitive throughout the entire season, and obviously we'd like to see us do better this year than last year," Coach Rick Carroll said.

He believes this goal is possible, particularly since the team is already starting out the season strong.

"We're working hard," Carrol said. "We have decent numbers. We have some kids with some experience."

Looking at the team's strengths, Carroll said the girls are able to run the ball quickly and find the open person well. Offensively, the players are unselfish, which Carroll hopes to see continue, and defensively he wants to focus on applying pressure to make other teams make mistakes. He also thinks the team will be aggressive at rebounding.

"And then we'll see if we can make a few shots along the way," he added.

As for weaknesses, Carroll noted that the team is physically smaller than some teams, which others may try to use to their advantage, but he added "hopefully we'll just be quick enough to get to where we need to be and help one another on defense."

Another advantage the team has is many of the girls have played together for a long time already.

"I think we've got a pretty good skill set with a lot of the girls, because they've spent some time playing and working on their skills," Carroll said.

Looking at the upcoming season, Carroll hopes to continue improving and working toward their goals. He explained the team usually spends time together at the end of practice discussing the goals the girls hope to achieve. And, in a general sense, the team wants to work toward a trophy at the end of the season.

The first steps toward that tournament began with practices, which started last week and have gone well so far, according to Carroll. When the season officially kicks off next week, the Lady Wolves will jump right in as they face multiple 4A opponents in the Casper invite, which Carroll said will allow them to see how they match up and face teams they may not see the rest of the regular season but could face in tournaments later in the year.

"So we don't mess around, we get right after it," Carroll said.