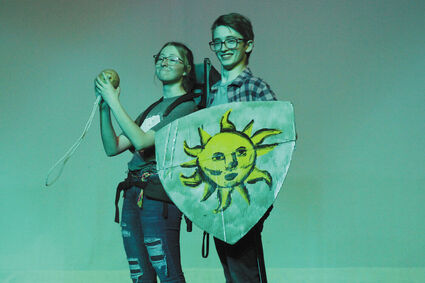 King Arthur, played by Timmy Golightly, strikes a pose and flashes a smile as he tries to recruit knights for the round table. He is accompanied by his faithful servant Patsy, played by Laural Kurth, who follows him banging coconuts together to make the sound of a horse's hooves.

The theater can be many things, but one is a place of escape - somewhere to get away, to laugh, to have fun and to forget the troubles of life for at least a little bit. This escape is something the Green River High School theater department hopes to provide with their newest production, "Spamalot."

"Monty Python's Spamalot" is a musical based on the film "Monty Python and the Holy Grail." GRHS Theater Director Bradlee Skinner said the musical follows the storyline of the film closely while adding music and incorporating elements from other Monty Python works. Like the film, the musical t...