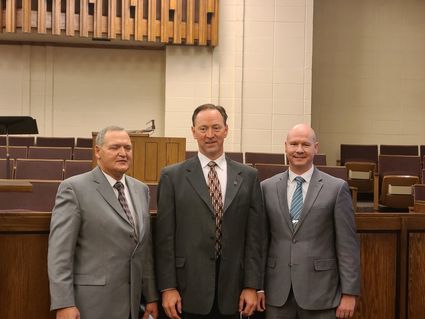 The Green River Stake of the Church of Jesus Christ of Latter-Day Saints was sustained Nov. 8.

The calling of Stake President was extended to Michael Earl Nelson II, who succeeds David W. Young. Young served as Stake President for nine and a half years. The change in leadership was conducted by Elder Shayne Bowen, a member of the Quorum of Seventy. Nelson will be assisted by First Counselor Martin Rose of Manila, Utah and Second Counselor Joel A. Robertson of Green River. The church is led by a lay ministry. The newly-called men will work in their regular careers while spending hours of their time outside of work to lead the church. Green River's Stake consists of eight wards, six of which are located in Green River, with two others established in Manila, Utah and McKinnon respectively.