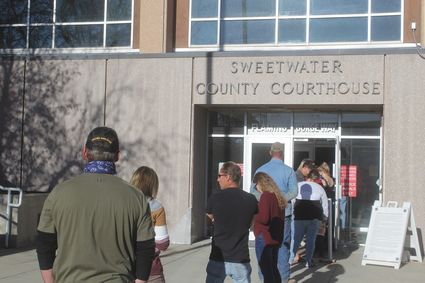 County residents line up at the Sweetwater County Courthouse Monday afternoon to vote at an early voting center established at the courthouse.

On Monday, the line was visible from Flaming Gorge Way as people lined up out the ground entrance and down a nearby sidewalk.

"We just wanted to get it done and in early," Kristine Daugherty, a Rock Springs resident said Friday. "This year will be nuts I think."

Daugherty said she didn't want to wait in line during the elections Tuesday, something she thinks a lot of other people at the courthouse Friday also wanted to avoid.

Paul Kollar, another Rock Springs resident, said he was voting early Friday because he had to work Tuesday.

"I thought I'd just come over and beat the crowd," he said.

He said he expected a longer line, but thought the wait wasn't bad.

Sweetwater County Clerk Cindy Lane said the county accepted 1,210 early voted by last Thursday and mailed more than 5,000 absentee ballots for the General Election, topping the Primary Election's number of mailed ballots by more than 1,000. The clerk's office also registered 300 voters in the eight days leading prior to last Friday.

"I think a lot of people are voting because who knows if they're going to be quarantined on Tuesday," Lane said.

Lane said her office has started opening and tabulating absentee ballots last Wednesday, with the ballot board in charge of the ballots having not finished tabulating those numbers as of Friday.

Lane said the election itself, along with various impacts related to the COVID-19 pandemic have lead to many voters voicing concerns about the security of their early ballots. She said one Primary Election voter insisted he take a photo of a person at the clerk's office accepting his ballot. She said ballots dropped off at the ballot box in front of the county courthouse were secure as the ballot box was bolted into the concrete and required two keys to open. Early ballots were also stored in Lane's office, which was locked whenever she left it and stored in special lock boxes.

Despite the needed security and extra precautions needed to host the elections, Lane said her staff has risen to whatever challenges have come about, which have included Lane being quarantined for potential COVID-19 exposure and Lane breaking her leg and not being in the office.