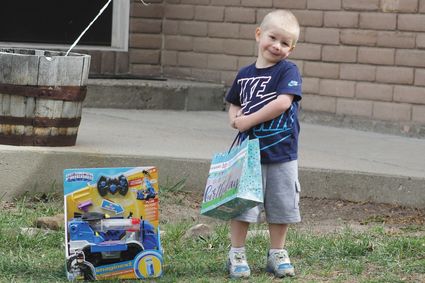 Dakston Griffiths smiles as he holds a gift bag stands near a Batman toy given to him by first responders Friday afternoon. During the COVID-19 pandemic, firefighters, law enforcement and paramedics have driven by birthday parties to brighten the days for children who may not be able to have their friends over.

The smile on three-year-old Dakston Griffiths' face couldn't get any wider.

The small boy clutched on to his toy Batman car with a glee often reserved for Christmas as a procession consisting of a fire truck, ambulance and police vehicles drove down the street. The vehicles' lights flashed as they drove by and the fire engine's horn, by far the loudest, echoed throughout the neighborhood. The scene definitely left an impression on the boy.

"Daks was all about it," his mother Hailey Griffiths said.

Everyone has been impacted in some way by the COVID-19 pandemic and limits on social gatherings. For many children, those infection-have resulted in birthdays that have been limited to close family, as their peers are unable to visit them on their special days. In an effort to create birthday memories during the pandemic, Green River's first responders have taken to driving by homes, treating the occupants and their neighbors with a special parade.

Murphy said he first saw other fire departments hosting similar visits on Facebook and decided to seek permission for the Green River Fire Department to do the same. He said the Sweetwater County Sheriff's Office had already started making birthday visits when the fire department had started joining them on Green River visits. With Castle Rock Ambulance Service, Murphy said since the group had been moved to the fire station, there has been improved communication between the fire and ambulance services, leading to more cooperation between them.

While he admits the visits are a great public relations tool for the department, it's the kids they care about.

Murphy, long known for giving toys out at his house during Halloween, donated new toys he had stored in his basement. Sparky the Fire Dog runs with the firefighters and often delivers the toys, delighting children he meets. For Dakston, Hailey said he was frightened at first, but warmed up to the first responders when he realized they were there for him.

Murphy said they decided to limit the visits to children 12 and under, but admits the fire department has made some exceptions in the past month, which have included visiting teens and adults.

However, while the visits have brought a lot of attention to first responders and the GRFD, Murphy said their visits will soon come to an end, with May 10 being the last they will drive out.

For Dakston, the real party will take place later this summer when concerns over COVID-19 are hopefully in the past. However, a memory that won't likely fade is the day the fire fighters, deputies, officers and paramedics wished him a happy birthday.

"He'll be talking about this forever," Hailey said.