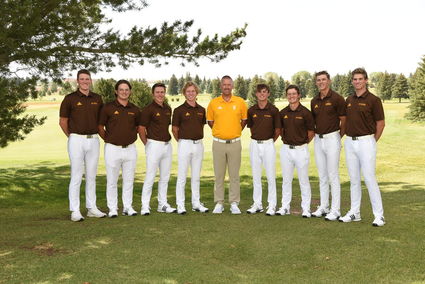 Photo courtesy of the University of Wyoming

The 2020 University of Wyoming Golf Team.

From the University of Wyoming

The 2019-20 Wyoming Cowboy Golf season was one of the best in school history despite it being cut short by the Coronavirus pandemic.

Wyoming as a team and the Cowboys as individuals reached a number of milestones, including multiple Top 5 team tournament finishes, school records and an individual tournament title.

Wyoming fired an 850 (-2) to capture 3rd place out of nine teams at the Ron Moore Intercollegiate in Denver.

UW's other under-par tournament score came at the Gene Miranda Falcon Invitational where the Cowboys shot an 863 (-1) to finish 5th out of 18 teams.

Cowboy sophomore Kirby Coe-Kirkham had an amazing season in 2019-20, resulting in him setting a new UW single-season record for lowest individual scoring average at 71.50 strokes per round. That edged out the previous record of 71.58 strokes per round shared by John Murdock and Drew McCullough, who both set that record in the 2017-18 season.

Cowboy sophomore Tyler Severin shot the best round of the day in the final round of the Wyoming Desert Intercollegiate to come from three strokes out of the lead entering the day to capture a two-stroke victory. Severin's final round 66 (-6) improved his 54-hole total to 207 (-9), giving the Longmont, Colo., native the first collegiate victory of his career.

Severin began Sunday's final round tied for ninth at 141 (-3) and was three strokes back of the tournament leader Tom Gueant of Oregon. But Severin showed right from the beginning of the final round that he was out to win his first collegiate tournament. After recording pars on the first three holes on Sunday, Severin would birdie Holes 4, 5, 6 and 8 on the front nine. His birdie on Hole 6 came on a chip-in from off the green. On the back nine, Severin would also birdie Hole 10 and close out his round with a birdie on the 18th. In addition to his six birdies, he made par on the other 12 holes in the final round.

Each player's golf bag was emblazoned with the name and branch of service of a fallen military member. At the conclusion of the event, those golf bags were auctioned with all proceeds designated for the Folds of Honor Foundation, which provides post-secondary educational scholarships for children and spouses of military service men and women killed or disabled while serving the United States. The fallen military member who was featured on Starzinski's bag was Chief Master Sergeant William N. Kendall, 52, who retired in 2013 after serving honorably for 30 years.

Kirby Coe-Kirkham was one of a select group of collegiate golfers invited to play in this year's Genesis Invitational Collegiate Showcase Pro-Am on Feb. 10. Coe-Kirkham played in a foursome that included a PGA Tour professional and two amateurs/donors representing the University of Wyoming. Wyoming was one of only 10 collegiate golf programs invited to play in this year's Collegiate Showcase, with 13 collegians from those 10 schools participating.

The event was created in 2015 in connection with the TGR Foundation, a Tiger Woods Charity. Each collegiate golfer played their own ball throughout the Pro-Am.

The top collegiate finisher was Sean Yu of San Jose State. He earned a spot into the PGA Genesis Invitational later in the week. The events were played on the famed Riviera Country Club in Pacific Palisades, Calif.

"In the end, we really did have a very solid year," Joe Jensen, University of Wyoming Director of Golf, said. "Knowing that I have a good team coming back really adds to the excitement moving forward for our program. As a team for us to shoot under par in half of our tournaments and to place in the Top 5 of half our tournaments were two accomplishments that shows the progress we are making."