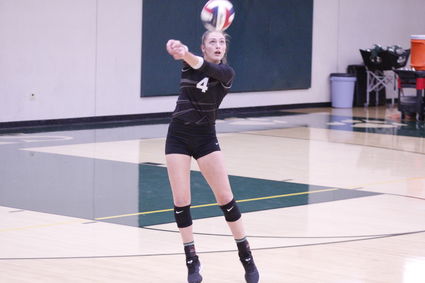 Madelyn Heiser has her eyes on the ball as she bumps it to a teammate during action against Star Valley at home.

The Lady Wolves Volleyball team's season came to an end this weekend at Regionals.

Despite the Lady Wolves growing as a team and improving, they did not advance to State this year.

Saturday afternoon, the Lady Wolves then took on Riverton and lost in three sets, 25-11, 25-21, 25-10. This loss sealed the Lady Wolves' fate and they did not advance to State.

Head coach Rikki Shantz said it was tough for the Lady Wolves' season to end and there were some tears in the locker room over it. However, she said there always are tears at the end of the season unless a team wins the State championship. It's hard to accept that a season is finally over.

"All 14 in that locker room were pretty heartbroken," Shantz said. "We wanted more for ourselves."

She said the goal is to always get to State and when that doesn't happen it hurts. Even though the team didn't make it to State, they made great strides.

"They learned what it means to be a good teammate," Shantz said. "I think every, single kid in our gym made a lot of growth in that area."

Shantz said while learning the sport is important, she wants to teach the players that there's more to a sport than passing the ball. She feels she completed that goal with this team.

"Those four were really loved by their teammates," she said.

One area the team became pretty good at was passing. Shantz said that's something she doesn't say about a team very often. The team also saw moments of greatness on the defensive end. This is something Shantz would like to see improved upon next season.

Shantz said this team was a team that fought hard each and every game. Even if they lost, they never gave up, never let it get to them and they continued to fight all season long.

One goal for next year, is building the team's confidence. Shantz said the team is capable of beating bigger teams, but they need to believe it. Overall the season was a great learning experience for all of them.