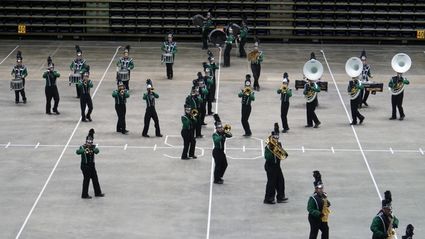 The Green River High School band performs one of its field routines at State.

The Green River High School band marched its way into an excellent rating at a recent State competition.

The 55-member marching band recently attended the Wyoming State Marching Band Festival in Casper. Since 2008, the band was attended this event.

"We attend this festival to give the students an opportunity to perform for different music educators, receive feedback and better themselves as musicians," GRHS band director Quinn Kalinski said. "Additionally, it is a great opportunity to support the other high school marching bands in the state and see all of the hard work they have put in throughout the marching season as well."

During State, the band is required to prepare and perform a half-time field performance, which usually consists of about three to four pieces of music and different marching routines. Something new to Green River's band was the addition of a color guard.

Kalinski said the band starts preparing for State in August before the school year even begins. They kick off the season with a band camp.

When school does start, they practice before and after school to learn the music, marching routines and put it all together on the football field.

At State, each band is judged on all of these things and given one of five ratings, which are superior, excellent, good, fair and poor. This year, GRHS received an excellent rating.

"I could not be more happy with the results. The students had their peak performance at the state marching band festival and played their hearts out," Kalinski said.

"They put on a wonderful show that was captivating and entertaining to watch and listen to. I could not be more proud of each and every one of my students, they worked hard all season and the many hours they put in really did pay off."

Not only were the students proud of their performance, but they enjoyed their time at the band festival, he said.

It's always a great educational experience for them to watch and hear the music and see the different styles of marching other bands are doing.

The students also had the opportunity to see the University of Wyoming's Western Thunder Marching Band perform at the festival.

"An experience like this is quite humbling and eye opening for anyone in attendance. It is an amazing feat just to see all of the different performances, but to see everyone come together to support that specific band performing is an awesome," Kalinski said.

"Every band wants the best for the other bands around the state."