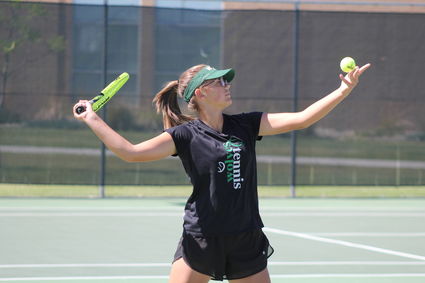 Rory Retliff prepares to serve during action against the Cheyenne high schools over the weekend. The Wolves came out 2-1 in matches with the three schools, defeating South and East over the weekend.

The competitions also represented the last conference matches for the season.

Head coach Phil Harder said the Wolves played well throughout the weekend, earning victories over South and East. The team ended up losing to Central.

"Our kids know that they can compete against Central; we just came up short this weekend," Harder said.

Harder said Megan Counts earned All-Conference honors over the weekend, finishing with a conference record of 7-0.

The team of Domenick Kunkle and...