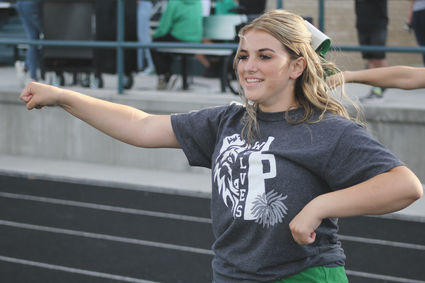 Ciera Silva poses as she cheers with the other cheerleaders.

When the Wolves play football at home, the action is never contained to the gridiron of Wolves Stadium.

While the Wolves took to the field in a scrimmage including both the Mountain View Bison and Farson-Eden Pronghorn's six-man football team, students and children alike were participating in activities throughout the stadium.

Outside the stands, on the grassy areas between Wolves Stadium and Lincoln Middle School, several children were enjoying one of the last, great summer evenings. Many were pretending they were padded up and playing in the big game.