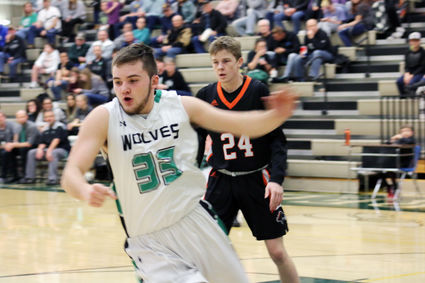 Braxton Yeager quickly moves into position during earlier action at GRHS. Yeager was named All-Conference after competing at the state tournament.

While Green River High School's boys basketball team made it to the state tournament for the first time since 2009, the Wolves were knocked out of the competition following losses to Campbell County and Evanston.

The No. 2 seeded Wolves had their first game against the No. 3 seeded Camels. Head coach Laurie Ivie said the Wolves played tentatively during the first half, ending it with a 12-point deficit. The Wolves bounced back during the third quarter, closing the gap and taking the lead, but couldn't hold it during the final quarter. The game ended with a 63-54 loss for Green River.