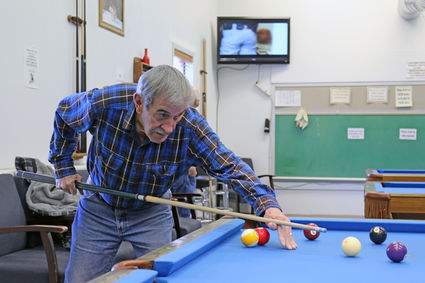 Dwain Driggs lines up his shot before hitting the cue ball into another.

Seniors were keeping themselves busy Friday morning by playing games.

About a dozen men were in the pool room enjoying the new felt on a couple of pool tables at the Golden Hour Senior Center, while a handful of ladies were playing UNO in another room.

"This is just a way to waste time in the morning," pool player Dale Johnson said.

Johnson was watching a couple of other pool players hit their shots before it was his turn. He was also in on the heckling that was involved in the game.

After one shot, Ed Dupre said to another player, "I'm just amazed you didn't scratch on that."

When it was Dwain Driggs' turn, he hit a couple of balls in, but then missed. However, where he left the cue ball made it difficult for whoever was going to shoot next.

"If we can't hit the ball, then we hook them," Drigg said. "It's defensive play."

Dupre was teasing Driggs and telling him not to rip the new felt on the pool table when he takes the next shot.

Larry Cauthorn said the new, blue felt was put in by Quality Billiards out of Salt Lake City. He said it cost about $500 per table and two tables had the felt replaced this time.

"They do a beautiful job," he said.

Since the GHSC bought the tables from Quality Billiards, they have been taking really good care of them. Cauthorn said the felt on the pool tables are replaced every year or two. It all depends on the condition of the felt and how often a table is used.

The patrons have their favorite tables and one of the tables is only used during tournaments. He said it's just the table that's closet to the lockers so players will place their sticks on top of it. That table probably hasn't had new felt put on it in the last 15 years.

"On tournament days we use all four of them," he said.

He said all four tables play the same and the ball travels about the same rate of speed on them, but they still have their favorites.

Meanwhile, in another room, a handful of ladies were trying to see who could be the queen of UNO. As the players got their cards dealt to them, they would make comments about how horrible a hand they were dealt. These ladies would also give each other a hard time when one played a skip card on another or reversed the play of game.

As the hands continued, the ladies would laugh and talk about anything that came to mind. For them, it was just another day of fun games with friends at the senior center.