County may return land to BLM 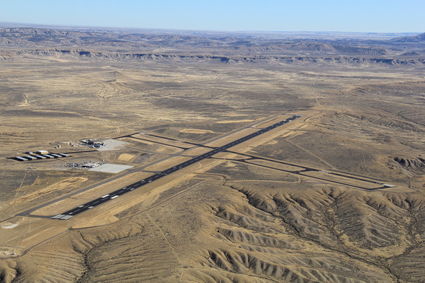 A parcel next to the Southwest Wyoming Regional Airport may be given back to the Bureau of Land Management.

Rickey Rocky, Sweetwater County Parks and Recreation board president, said the model RC Airport, which is located on Baxter Road near the airport, is no longer serviceable.

"The rule changes from the Federal Aviation Administration have condemned that space unflyable for RC controlled planes, drones or anything radio controlled," Rocky said.

He said the space was meant to be run by a club or an organization, but no one has shown any interest in using the parcel for years.

"That pretty much went by the way side," Rocky said.

There has been a loss of interest in this type of activity since everything has basically switched over to drones, which can't be flown next to an airport.

He said as far as the location, they don't see it becoming a park because they don't have access to water or utilities.

"We can't find a viable use for that area," he said.

Rocky said maybe the BLM could find a use for that land.

Chairman Wally Johnson said that even though the Sweetwater County Recreation Board voted unanimously to give the property back to the BLM, the county commissioners are the ones that have to do it.

He asked the other commissioners to take it under advisement. He said they can think about it and see if they have any ideas of what the land could be used for.

They can take a vote on it at the next meeting.

"I hate to give anything back to the federal government," Johnson said. "They take enough as it is."

However, Johnson said he knows if the land can't be used for anything, then they should look at giving it back. He said they would need to talk with the BLM and find out what they want the county to do before giving that land back.

Rocky said they BLM has asked that the land be reclaimed back to its native state before they take it back. This would mean the asphalt would need to be ripped out of the area.

"We can't let it sit out there, it becomes a liability," Johnson said.