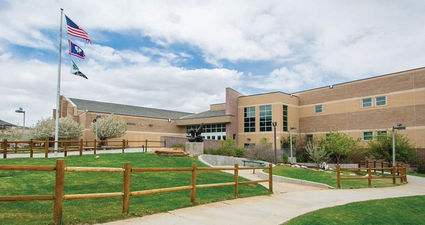 Around 7:40 a.m., shortly after school started, the power went out.

The back up generators kicked in, but the generators only run the lights, not heat.

"I've got to compliment our maintenance crew," Howard said.

They were at the high school quickly and determined what the problem was. They also told Howard that it would take a long time to get the part and make the repairs needed to get the breaker up and running.

Knowing this, Howard and vice principals Rhiannon Doak and Joe Hamel, worked together to get busses lined up to take the kids home and make sure all parents knew about the students being released early. Howard said they sent messages on Schoolway, which is an app most parents have on their phones and asked the radio station to make announcements. The alerts stated that due to a power outage at the high school, students would be released at 9 a.m.

Those who ride buses to school would be taken home on a bus and those who drove to school could drive home.

Howard was impressed with how quickly the transportation department got bus drivers back to the district to run those bus routes.

"I think our process and communication was very smooth," Howard said.

Luckily, the phones and intercom system was still working so they could make all necessary announcements to inform the students of what was going on. The students and staff will have to make up half a day due to the early release. Even though the district will have more than enough instructional time, the state counts days.

Howard said they are in the early stages of picking a time when to have the make up the half a day.

Some options discussed are tying the makeup day to spring break, having it on the same day as parent-teacher conferences or having the students come in on a Saturday. Once they have a better idea of the options, parents will receive the information.