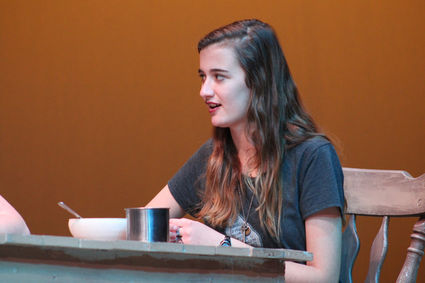 A play based on the Salem witch trials is sure to captivate those who go and see it.

The Green River High School theater department is putting on "The Crucible," which was written by Arthur Miller. "The Crucible" is a classic portrait of one man's struggle toward grace, and is set in the scorching context of the 17th-century Salem witch trials. "The Crucible" renders human struggles both internal and external: a community galvanized by fear and suspicion, a wife betrayed by lust, an orphan girl blind with passion and obsessed with revenge, ruthless prosecutors, deluded holy men and covetous neighbors. Miller's scrip shows the power of hysteria and rancor, the blindness of zealots, and the heart of one tortured man trying to find his own goodness.

GRHS theater director Bradlee Skinner said he is giving the production of "The Crucible" a PG-13 rating.

"Not due to any language or violence issues, as their are none, but simply because it deals with references to witchcraft, the macabre and death," he said. "We encourage all adults to be diligent in their research of the play and make wise decisions in determining if their own children are mature enough to see this production."

The GRHS students and Artina Karimi, a Lincoln Middle School student, will perform the play. Skinner said the students received their scripts in May, but rehearsals didn't start until the second week of the school year.

Despite having the scripts over the summer, the students still had challenges to face.

"This is a challenging show," Skinner said. "Being from early colonial America they are not the most relatable characters and creating believable characters for our performers has been a welcomed challenge."

They also had a hard time coming to terms with how the play was based on real trials that took place in America.

"One of the main comments students have made was that they couldn't believe our country actually existed in a time where people killed innocent people simply for being accused of being a witch," Skinner said. "They quickly drew other parallels to other events in history which were not so different."

Skinner said he picked this play for two reasons. The first being how it connects to the curriculum of the Wyoming Language Arts state standards and many students in the play have or will study this in their American Literature course.

"The second reason was that talent of the students," Skinner said. "We have incredibly talented students who were up for the challenge of tackling a difficult production, such as "The Crucible.'"

"The Crucible" runs Thursday, Friday, Saturday and Monday; all show times at 7 p.m. All tickets purchased online at showtix4u.com or by any student in the play are just $5. Tickets can be purchased at the door for a cost of $7.