Magic discovered at the library 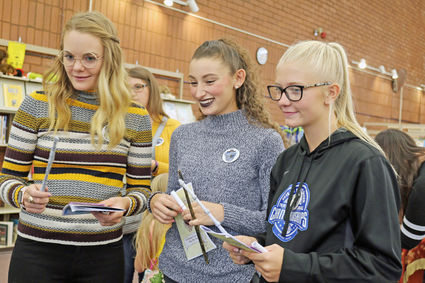 Anna Kimball, Haylen Cordova and Kaylee Hymas try to figure out which potion they need to reverse a spell.

Once children walked through the doors of the library, they were given the Marauder's Map, which showed them what path to take to make it through the library.

The children then made their way to the Sorting Hat to determine which house they will be in at Hogwarts School of Witchcraft and Wizardry: Gryffindor, Ravenclaw, Hufflepuff or Slytherin. What the children didn't know was how they were sorted by the hat was determined based on which house button they picked up.

After the children were sorte...